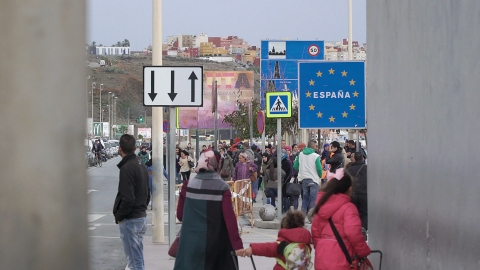 30.000 people cross the border between Spain and Morocco everyday, but there are a lot more stuck behind knives and others who lose their life in the sea

The road heading Ceuta from Tanger is winding and rippling. The landscapes are practically nude. There's lack of vegetation, despite some eucaliptus little forests you can barely see from the distance. In some sections of this 75km long path, the way edges the sea. And at this certain point, it hurts only by looking at it. The distance separing Africa from the dreamed Europe is so small. It is certainly short. Visible from the morroquian site. Only 14km that seem easily reachable. And it is perceived like that by hundreds and thousands of subsaharians who have been thowing themselves to the water for over a decade within speed boats, dangerously precary, looking for this dream paradise. The placidity of an apparent gently sea is just an illusion. The Strait area, where the mediterranean sea and the altantic ocean get mixed, has harsh currents running which suck in like an actual funnel.

After an hour going by cab, us, a team from El Sumplement de Catalunya Radio with Ricard Ustrell and Guillem Cabra, make it to the border splitting Morocco and spanish territory. Depending the countries, the affluented areas tend to be caotic and loudy. I'm thinking the border between Senegal and Gambia, for example. Suffocating. So this is no exeption. Around 30.000 people walk this straits on a daily basis.

Walking or either by car. Loud horns from marroquian cabs waiting for clients get mixed with the loud yelling by those who offer help in exchange for some dirhams, all toghether with those who mean to sell you stuff.

Enslaved women fetching and carrying junk all around the border

Forged steel women with bended backs to their knees carrying 60 to 90 kilos weight baskets full of clothes, shoes, blankets, food or junk. They get all this materials from the industrial estate of Ceuta to take it to the marroquian area. Anything fits within this balance baskets. Morocco does not aknowledge the path from Ceuta as a comercial via. Hence, this bans exportation and what should be carried by vans is by this forged steel women, enslaved. And this is made by simulating lugagge with no weight limitation excercising tolerated contraband.

Tarajal's border, in Ceuta, where people are pushing while claiming the right go across

Once we pass the first marroquian control access, we run into the spanish customs access. Hundreds of people gathered towards the fence with their arms up, desperately claiming to be let in. It is certainly not needed to know the language they speak to know what they claim. The context and their gestures are so clear the messages are sent with no need for translation. Before them a police officer, undeterred to their demands. When he sees us he points at us with an OK move. We got our passport. We are free to go in.

We go across a strait and fenced corridor, and few minutes later we are stepping onto spanish territory. There's where Alfonso Cruzado is expecting us, head of the Communication Dpt of La Guardia Civil of Ceuta. A kind man, with a 28 years working experience behind him, following orders. Alfonso takes us to the wall.

It is a grey and rainy day in Ceuta. And the water angerly falls when we stop at a fence with our car of the worthy institution. A double steel filament of 6 meters high and 8 kilometers long, filled with sensors and security cameras. We get off our strech vehicle and, under this angry rain, we raise our eyes and see wires with knives, capable to cut flesh and the dreams of those wo escape from the war and the misery.

Alfonso Cruzado talks about feelings, "we all have family and kids", says. But he also claims for the responsibility of the police officers to face the desperate attempts of those who are willing to go across the fence. The law is imposed to empathy. Reminds the devastating image seen of a woman about to give birth thrown from the top of the fence. A colegue could stop her from hitting the road.

Ommar, an officer from la guardia civil: "The fences and walls are no solution"

Ommar Mohamed is also an officer of la Guardia Civil. He's been part of it for 20 years. And also follows orders. But his speech seems to be less euphemistic than officer Cruzado's. Ommar is the general delegation of la Guardia Civil's Unified Association of Ceuta's secretary. While having a coffee we get to talk about what initiatives would be best to stop this human drama. And,  responding firmly that the borders, the fences and the walls are no solution whatsoever. To avoid mortal exodus, he supports investing in these natural countries the money destined to security and surveillance. Ommar is critic to those politics imposing a return to marroquian territory and with no legal guarantee to those sub-saharan people who made it through the borders. He tells about the case of a boy who stood 21 hours long hanging of a fence. Fighting the balance. Fighting hanger and fatigue. When they made him go down, they directly sent him to Morocco.

These are the well-known cases known as "hot devolutions", a politic that does not follow the law and life. The officer's eyes go down and with the mouth smalled confesses that, if it'd been up to him, he would have rewarded the strenght of that exhausted young boy ignoring all stablished protocols. "First of, the responsibility, though. Otherwise i would never be a police officer", he  concludes.

The come back to Morocco is not welcome to no one. Over there the police does daily raids against the sub-saharans who expect the mountains to be a oportunity to fool the borders. And these raids are extremely violent. No simpathy. The marroquian authorities hit them brutally, and some of them die by it.

They take everything from them. Their money. Their phones. Their clothes. Their shoes. Naked and pennyless. Deeply wounded in flesh and soul. And this only those who survive. Ommar, as Alfonso, has seen very hard scenes at the fences. Cuts, fractures, browses, scars, cries, desperation. Still the cries for help from two kids who drowned few meters from the fence. " There's nothing we could do. It was dark and the Tarajal's area is very rocky. Their mournings remain in my heart".

The sea is another fence. Way more mortal. And this is confirmed by Germinal Castillo, head of the Red Cross of Ceuta's press, who we meet at Almina School's bar. " The Gibraltar's Straight is the hugest mass grave in Europe", he sais. He's been working in this organisation for over 20 years and sais it is impossible to get used to a reality like this one. "The day I get used to it, I'll be quiting".

The Red Cross atends 30 people every week, arriving by the sea

The Red Cross atends every week around 30 people arriving by the sea on these small paper boats, or jumping above the fence in very imagitanive ways, like wearing sneakers with knives in their hands in order to climb the fence more effectually and avoiding the razor wire walls. The Germinal denounces Ceuta is living an invisible inmigration that goes unnoticed: "What means 30 people a week compared to thousands arriving through Italy or those stuck in Greece?". The number is way lower, but the drip is constant. The Germinal speaks about the insides. He is one who lives to help others. He saves lives who come yet broken. It's a hard work, but it fullfilling. "Every moment is unique. One look, one hug, a 'thank you'. That's everything, and unforgetable".

The rain does not ease and it's getting dark. Down the cemetery's gate of Santa Catalina expects us Martín Zamora, he's grave-digger. He wears a blue gabardine, with high neck and strongly exhales the remains of a cigarette. We follow his long shade through this silent city's streets. Stopped before a graves line he points the ones on the top who, in contrast with the ones at the bottom, are blank. No inscription. No name.

Not one single flower. "You see those at the bottom? The no named ones? They belong to the sub-saharans who died in the sea". "No one knows who they are. No one claimed for them. Dissappeared lives.

Persons with no identity within naked graves. Buried with no clue of who they used to be, nor their names, where they belong, nor a clue about their dreams. At Santa Catalina's cemetery there are 40 graves where the desires and dreams who risked everything for a dignifying and peacefull life lay. Withink the abiss of the Mediterranean lay thousands".

The cemetery of Santa Catalina, there are graves in blank for those who went across the sea and have no one to get them buried

Maite Pérez talks about rush and with conviction. She is a volunteer in the San Antonio's Inmigrants Association. An entity which relies upon the Cadiz diocese and works for hosting, atention and education of these people. They are tought spanish, have different relaxation workshops, and classes to prevent violence of genre. They create spaces of exchange and dialogue. We meet Carmen at a bar next to the centre of Ceuta. She's been involved in this project for ten years and has seen so many things. The visible scars and those on the inside, which are the most difficult to find. She says the most difficult this to assume is the death of a relative. The distance is mortal. The yearning as well. The helplessness, infinite. The path until getting to Europe is so tough that it makes the come back impossible. Not even to their mothers, fathers or brothers funeral. Every morning the association has the visits of youngsters from 18 to 35 years old. Subsaharans and some marroquians who sleep at the CETI, the temporary facility for inmigrants.

Women don't tend to go. The mafias take proffit of their vulnerability. Their journey before they make it to common territory is horrible. Most of them are raped or enslaven. Others are murdered and thrown to the dessert. Victims of the border.

With wet feet, we get into El Faro de Ceuta headquarters. Carmen Echarri, the director, has been waiting for a while. She's an expert on migration subject. She's clear, pedagogical and forceful. She knows every name and life of those who stepped into the CETI and now are in hosting centres of the peninsula. And when she recalls them her eyes get wet. "What do you want me to say? They are wonderful and thankful people. They are steel will survivors".

At her literary essay "Strangers at home's door" (Arcadia's editorial 2016), the sociologist Zygmunt Bauman writes that "those foreign people tend to cause angish precisly because they are strangers and so imprevisible and fearsome, in contrast to those we interact with everyday. Very little we know about the strangers to get to really understand their ways and guess what intentions they have. And to unknow what to do makes angsh and fear."

That's why Carmen is so determined. She'd love everyone to visit the CETIs, look at them in the eye and listen to their stories. Only with common knowledge this stigmas can be erased.

No one wants to stay in Ceuta. Ceuta, as Melilla, is a transit place. The french anthropologist Marc Augé named this concept no-place to mean those spots known for being transit places, volatile. For instance, the airports, the service areas on the highways, the big malls. Ceuta could be this, a no-place, a stopping-off before continouing the bunkerized Europe. The paradise does not exist and it stopped raining in Ceuta.